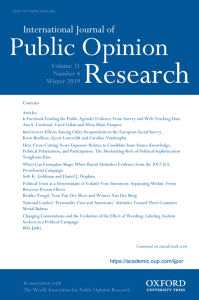 The article "Changing Connotations and the Evolution of the Effect of Wording: Labeling Asylum Seekers in a Political Campaign" by Béla Janky has been published in International Journal of Public Opinion Research.

This paper investigates the moderating role of public discourse in the effects of labeling asylum seekers (as “immigrants” vs. “refugees”) on attitudes toward asylum policy. The study relies on a series of survey experiments conducted in Hungary, in a period when asylum policy suddenly became a highly salient issue there. Originally, respondents were much more solidaristic toward “refugees” than “immigrants,” but the public discussion on asylum policy suppressed this wording effect—mainly by contaminating the concept of “refugee.” By using data on news reports and respondents’ media use, the analysis also looks at the roots of these changes. In particular, it presents evidence on the moderating role of converging connotations of different labels on the effect of wording.