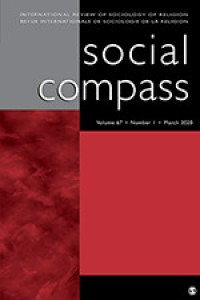 The paper by Bulcsú Bognár and Zoltán Kmetty has been published in Social Compass, title: Believing without moralising: Secularised religiousness in Hungary
Available here: https://doi.org/10.1177/0037768620949064
Abstract:

This article explores the features of religiousness as it is supported by governmental policies in Hungary. The research interprets the values held by social actors in terms of their relationship to violations of norms that are sanctioned and those that are not sanctioned by the state. The analyses of our representative sample revealed a type of secularised religiousness in more than one dimension. The value orientations of religious people in Hungary appear to be aligned with secular society. The main trend seems to be that the moral judgements of religious people do not differ from those of the people who consider themselves not religious or atheist. Religious people in Hungary no longer find guidance in their religious tradition – which is regarded as obsolete in today’s secularised public discourse – but are oriented by the values of the secularised world, inevitably drifting away from their Christian roots. Differences between religious and not religious people appear only in certain position statements relating to homosexuals.