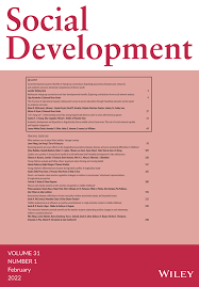 The article „How dislike and bullying co-develop: A longitudinal study of negative relationships among children " by Dorottya Kisfalusi, Marianne Hooijsma, Gijs Huitsing and René Veenstra has been published in Social Development.

This study investigates the network mechanisms underlying the co-development of two types of negative relationships: dislike relationships, and victim-bully relationships among children. Longitudinal data on school-level networks of 15 Dutch primary schools (N = 2175; Mage(T1) = 10; 51% male) were analyzed with stochastic actor-oriented models. Evidence was found for mutual reinforcement between dislike and bullying/victimization. Disliked children were more likely to bully those or be victimized by those who previously disliked them. Over and above these effects at the relationship level, children who were previously disliked by more schoolmates were more likely to bully or to be victimized by other schoolmates. Victims were more likely to be disliked over time by those who bullied them, but not by other schoolmates, whereas bullies were more likely to be disliked over time by not only those they bully but also other schoolmates. Contrary to expectations, no support was found for hypotheses that sex-based in-group favoritism affects children's dislike for bullies or their tendency to bully disliked others. The findings show how children's negative feelings and bullying behavior toward schoolmates mutually influence and reinforce each other over time.